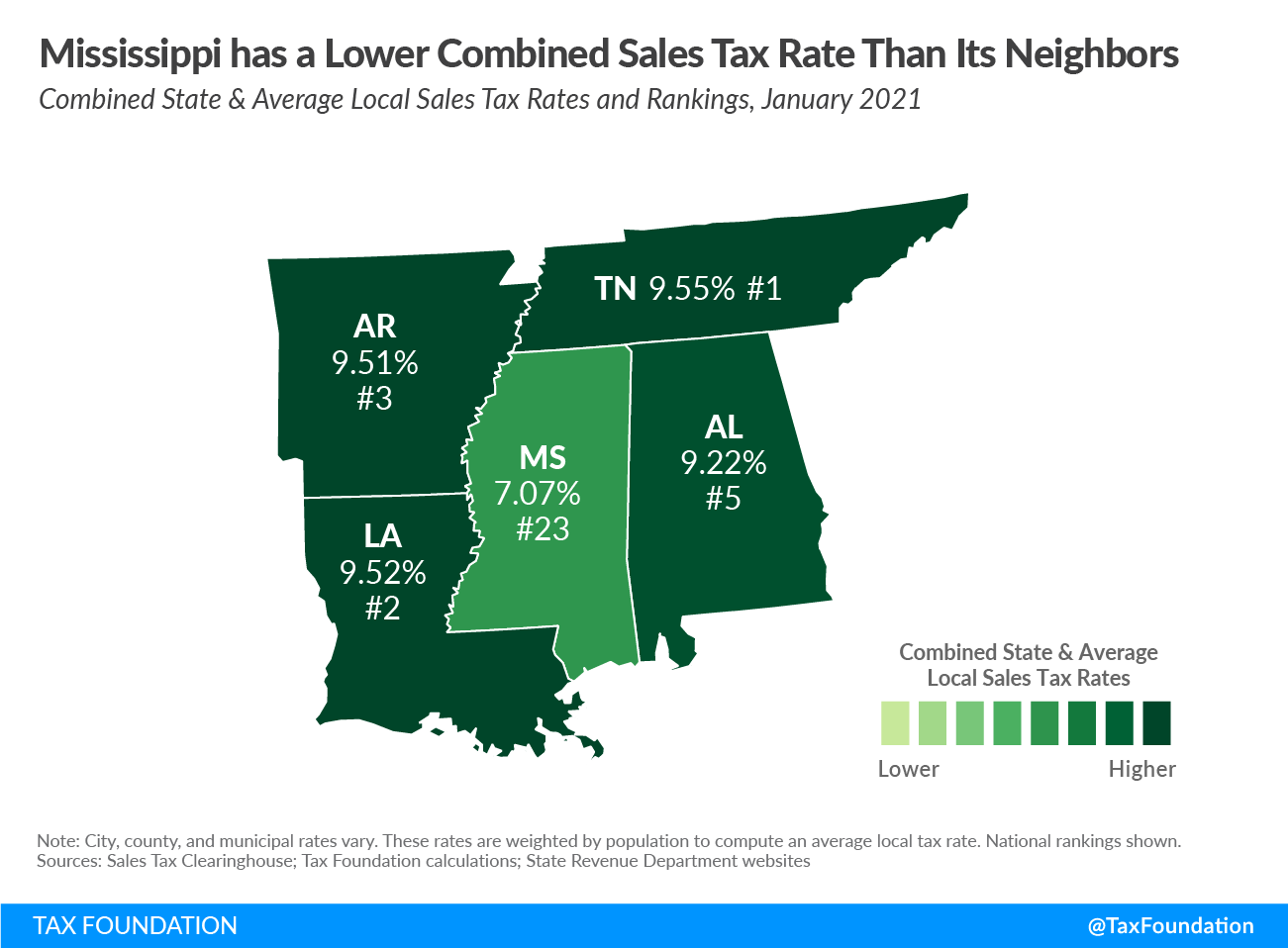 Only one state (Alaska) has ever repealed a broad-based individual income tax. Mississippi and West Virginia are now vying with each other to be the second—but can they do it?

A bill introduced by Mississippi House Speaker Philip Gunn (R) to phase out the state’s individual income tax has moved quickly through the House, advancing through the Ways and Means Committee on February 22, and passing the full House the next day. House Bill 1439, the “Mississippi Tax Freedom Act,” would phase out the individual income tax over a period of 10 years or more, contingent upon revenue availability. In the short term, the bill would dramatically increase the personal exemption so that an estimated 60 percent of Mississippians would not pay the individual income tax starting in 2022, offset by higher sales taxes. In future years, year-over-year revenue growth (after accounting for inflation) from recurring revenue sources would be used to continue increasing the personal exemption, culminating in complete repeal. While advanced by a Republican Speaker, the bill passed the House with a bipartisan coalition that included the Minority Leader and Minority Deputy Leader.[1]

Nine states forgo broad-based individual income taxes. (One, New Hampshire, taxes interest and dividend income only, and Tennessee taxed income from those narrow sources until this year.) Some of these states, like Alaska, South Dakota, and Wyoming, are able to lean heavily on severance tax revenues from oil and gas, an option not available to all states. But in states like Florida, New Hampshire, Tennessee, and Texas (where severance tax revenues are meaningful, but not a full explanation), different strategies have worked—and worked well.

Over the past decade, states which forgo income taxes have seen their populations grow at twice the national rate.[2] And the ongoing migration from high- to low-tax states, and particularly states with low income taxes, is likely to accelerate with the growing viability of telework post-pandemic.[3] Increasingly, many people will be able to live wherever they wish. Those who are highly sensitive to taxes will find it easier than ever to relocate to jurisdictions with lower tax burdens, regardless of where their employer may be located. And employers themselves will have more location flexibility as geography becomes less of a constraint on their workforces.

When it comes to making major changes to the tax code, however, details matter. The revenue offsets matter, as does the design of phasedowns.

Reducing the tax rate over time, as Gov. Tate Reeves (R) had proposed, would provide a more stable path to phaseout than expansion of the personal exemption.[4] Increased sales tax on intermediate transactions will create more tax pyramiding, where the same final good or service is taxed multiple times throughout the chain of production, putting some Mississippi businesses at a competitive disadvantage. As of this writing, House Bill 1439 does not have a fiscal note, so a detailed breakdown of how much revenue each offset would generate is not publicly available. It will be important for lawmakers to have a detailed understanding of the bill’s revenue implications to inform further deliberations.

Under current law, in arriving at Mississippi taxable income, a personal exemption of $6,000 (single filers), $12,000 (joint filers), or $9,500 (head of family filers) is allowed. A dependent exemption (generally $1,500 per dependent) is also allowed. In addition, taxpayers may claim itemized deductions or the state standard deduction ($2,300 for single filers and $4,600 for married couples).

In each year thereafter, the exemption would increase contingent upon revenue growth. Specifically, each year, the state would determine the amount by which the prior year’s tax collections from recurring revenue sources grew above inflation compared to the year preceding it. The income tax phases out subject to revenue availability, not on a strict schedule. According to the bill sponsor, if revenue grows according to projections, the individual income tax would be phased out in its entirety after approximately 10 years, with fewer and fewer Mississippians paying individual income taxes over time. As Speaker Gunn has explained, starting in tax year 2022, almost 60 percent of Mississippians would be removed from the individual income tax rolls entirely.[6]

In other states, phased-in income tax reductions have generally focused on rates more than on exclusions. While they have sometimes been accompanied by higher initial standard deductions or other income exclusions, or have accelerated reductions for lower income brackets, phasing down the tax entirely by increasing the amount of income exempted until all taxpayers are exempt is a novel approach. Phasing in an increase to the personal exemption gives many taxpayers full relief immediately, while leaving other taxpayers on the tax rolls for many years, despite reducing their overall liability. If policymakers are set on full repeal of the income tax, this approach may increase the chance that phasedown efforts will stall, with there being less political will to continue putting revenue growth toward further reductions. Even if policymakers wished to target more of the initial relief to low-income taxpayers, phased rate reductions would have a greater chance of yielding full repeal in time. They would also affect the marginal rates at which investment decisions are made. While all taxpayers will experience immediate tax relief under this proposal, higher income taxpayers and particularly small business owners—who overwhelmingly pay individual, not corporate, income taxes on their business income—would still face the same rate on marginal income, initially limiting the impact on encouraging additional investment.

While a combined rate of approximately 9.57 percent is indeed high, it would be on par with several of the states that levy no individual income tax, including Tennessee (9.55 percent), Washington (9.23 percent), Nevada (8.23 percent), and Texas (8.19 percent). Notably, it would also be on par with its three other neighboring states other than Tennessee. Alabama (9.22 percent), Arkansas (9.51 percent), and Louisiana (9.52 percent) all have similar combined sales tax rates despite imposing an individual income tax as well, which Mississippi would substantially limit, and ultimately repeal, under this proposal.

While many proponents of a preferential sales tax rate on groceries view it as a way to reduce the regressivity of the sales tax, there is little economic justification for lowering the sales tax rate on groceries while raising the rates on other goods and services, with empirical research suggesting that the higher general rates necessary to offset a reduced or zero rate on groceries have more of an impact on lower-income consumers than does the inclusion of groceries at the ordinary rate.[8] This counterintuitive finding is largely explained by existing policies in all states, driven by federal law, excluding SNAP and WIC purchases from the sales tax base. Above that threshold, grocery purchases tend to scale well with income. An ideally structured sales tax is one that applies to a broad base of final consumer purchases at a single rate, while exempting business inputs to prevent tax pyramiding.

Notably, moreover, sales taxes on business inputs affect business competitiveness in a way that sales taxes on final consumption do not. Although Mississippi’s sales tax is origin-sourced, most sales taxes are destination-based. A Louisiana purchaser of goods from a Mississippi company does not currently get a sales tax break because Mississippi’s rate is lower than Louisiana’s, nor would they be affected by a future higher rate, since they would pay Louisiana’s sales tax, not Mississippi’s. Therefore, the Mississippi business is not placed at a competitive disadvantage in multistate sales. This changes, however, when the sales tax increases the cost of its inputs, as it must compete in the market with rivals based in other states which do not face such taxes.

In addition to the sales tax rate increases on certain business inputs, the sales tax rate on cars, trucks, and other vehicles would increase from 3 percent to 5.5 percent. Because vehicles are high-dollar purchases, this is a significant source of additional revenue, and one that aligns with best practices in other states, which often (without much justification) provide lower rates on automobiles, but usually not as low as 3 percent.

While consumption is a less economically harmful tax base than income, policymakers should use caution when it comes to raising various sales tax rates on an ad hoc basis. Where possible, policymakers ought to consider expanding the sales tax base to additional consumer (not business-to-business) purchases that are currently exempt—or reconsider various narrowly-targeted individual income tax incentives—to avoid significant rate increases.

House Bill 1439 would also raise revenue from higher excise taxes. Alcoholic beverages are included in the sales tax base, so they would see a rate increase from 7 to 9.5 percent along with other goods taxed at the ordinary rate. This makes sense, though it is important to note that Mississippi is a control state, where the state administers alcohol sales and marks up prices by 27.5 percent (effectively a tax) before such products are sold.

The bill also proposes raising the cigarette tax rate by 50 cents per pack (from $0.68 to $1.18 per pack of 20 cigarettes). Currently, Mississippi’s cigarette tax rate is 39th highest in the country, and if it were increased to $1.18, it would become the 34th highest in the country. This is not a high rate, though policymakers should bear in mind that cigarette tax revenue generation is notoriously unstable due to the ongoing decline in smoking.[9] While an increase in the cigarette tax rate would produce a short-term revenue spike, much of that will erode over time with tobacco cessation. Depending on assumptions, this may mean somewhat less revenue than anticipated to trigger future expansions of the personal exemption.

Finally, House Bill 1439 proposes including vapor products in the definition of tobacco products, which would subject them to taxation at 15 percent of the manufacturer’s list price. Vapor products are not currently taxed in Mississippi. This rate would be lower than in several other states but would subject vapor products to an inappropriate price-based tax.[10] The relatively low rate is positive since vapor products are less harmful to consumers than cigarettes, so there is good economic justification to tax them at lower rates than more harmful, combustible alternatives.[11]

Mississippi policymakers have latched onto a bold plan, and one that is generating bipartisan support. Mississippi has an opportunity to become the 10th state without an individual income tax and to do so with sales tax rates which, while certainly high, are in line with regional competitors. For such a momentous undertaking, however, policymakers should be equipped with reliable revenue projections and a detailed accounting of how much revenue is projected to come from each offsetting change. The absence of a fiscal note is concerning, and something that can hopefully be rectified in time for Senate deliberations. (The legislature is scheduled to adjourn March 15th.) This would also enable policymakers to better grapple with the magnitude of increased taxation on business inputs and would provide the public with more information about how the subsequent phasedown is expected to proceed.

A change worth doing is worth doing right. Many states have successfully reduced reliance on broad-based income taxes, and nine states do admirably without one. But proponents and opponents of reform often talk past each other. Some on one side have little interest in acknowledging Texas, Florida, Tennessee, or many other states that have reduced or go without an income tax and reap the benefits. Some on the other side would often prefer not to talk about Kansas, where haste, wishful thinking, and a desire to implement a sizable net tax cut without identifying offsets or spending reductions made for a notoriously failed experiment. With the bill now headed to the Senate, lawmakers should take the time that remains to ensure that the final legislation is sustainable and will enable Mississippi to meet its goals.

[4] Katherine Loughead, “Will Mississippi Be the Next State to Phase Out its Income Tax?” Tax Foundation, Nov. 24, 2020, https://taxfoundation.org/mississippi-income-tax-phase-out/.