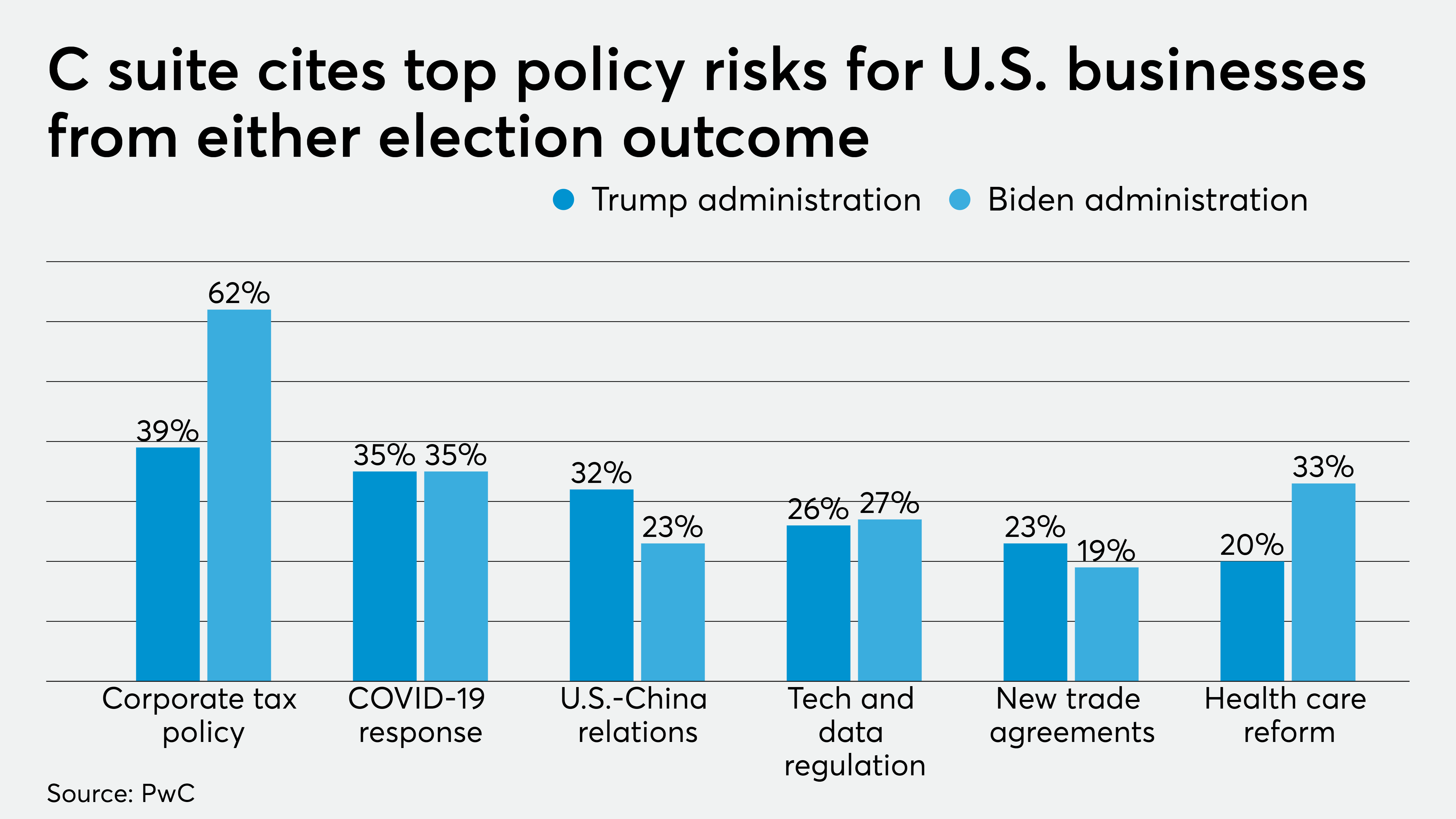 CFOs and other C suite executives are far more concerned about changes in corporate tax policy during a Joe Biden administration than if President Trump is re-elected, according to a new survey by PwC.

The survey of 536 C suite leaders found them to be significantly more concerned about potential change to corporate taxes policies under a Biden administration (62 percent) compared to a second Trump administration (39 percent). Uncertainty about the federal government’s response to the COVID-19 pandemic ranked as the second most pressing policy-related risk cited by the survey respondents (35 percent for both Biden and Trump). They diverged somewhat on the third most pressing policy-related risk, with health care reform ranking in third place under a potential Biden administration (33 percent) and U.S.-China relations in third place under a second Trump term (32 percent).

When asked how the outcome of the general election would affect U.S. corporate tax rates, 76 percent of the U.S. executives surveyed indicated that business tax rates would rise in order to pay for COVID-19 relief, no matter which party runs Congress, an increase of 6 percentage points from a similar survey by PwC a month ago.

Executives are significantly more concerned with changes to corporate tax policy under a Biden administration. “They believe that business tax rates will rise regardless of who is in control of Congress in response to COVID-19,” said Roz Brooks, U.S. public policy leader at PwC, during a conference call with reporters Tuesday.

If Republicans maintain control of the Senate, then the risk of new business taxes will be zero, according to Kumar, but executives assume taxes will go up if there is unified Democratic control of Congress and the White House or, in a divided government, only if there is some outside pressure to narrow the fiscal gap. “This would be some sort of grand bargain where Republicans agree to revenue increases and Democrats agree to entitlement reforms,” he added. “But I don’t see any evidence that external pressure is in any way imminent, or even in the tax increase proposals that are currently being discussed in the campaign. They’re not there to reduce the debt. They’re there to pay for new spending.”

The tax directors surveyed by PwC are worried about international tax policy risks. The survey found that executives believe a surtax on the foreign income of U.S. companies would make U.S. companies less competitive globally.

“A growing U.S. market provides the greatest incentive for reshoring, whereas a surtax would be the least likely to cause that result,” said Kumar.

Businesses see increasing risk on revenue growth from tax policies, but even more risk from what’s happening overseas. “On the one hand, events happening abroad are completely divorced from the U.S. election,” said Kumar. “But on the other hand, the prospects for a change in control in the U.S. government brings with it the risk of potentially significant domestic tax policy changes. What we saw in the results was a slight majority of tax leaders, about 52 percent, said that growing tax policy and administration uncertainty in foreign jurisdictions poses the greater challenge, versus U.S. policy changes, but 27 percent disagreed with that sentiment, presumably ranking the U.S. changes as a higher risk, and about 24 percent give it equal weight. There is an ongoing global campaign to rewrite the international tax rules by the G-20 and the OECD.”

Executives are concerned about state-level tax changes as states search for revenue to fill their own revenue holes, along with digital taxes imposed abroad.

Executives are continuing to look for deals to drive growth in 2021. Most of the executives surveyed plan to pursue an acquisition: 64 percent under Trump compared to 62 percent under Biden. However, the business leaders polled by PwC believe there will be more regulatory scrutiny on deals under a Biden administration (61 percent) compared to a second Trump term (41 percent).

Despite the coronavirus pandemic and uncertainty about the U.S. election, business leaders are “laser focused on pursuing growth in this environment,” according to PwC U.S. chair and senior partner Tim Ryan. He is seeing a “significant amount of digital transformation happening” as businesses try to reduce costs and look for new ways to gain advantage. He is hearing more CEOs focusing on M&A to acquire businesses that match up with their portfolios.